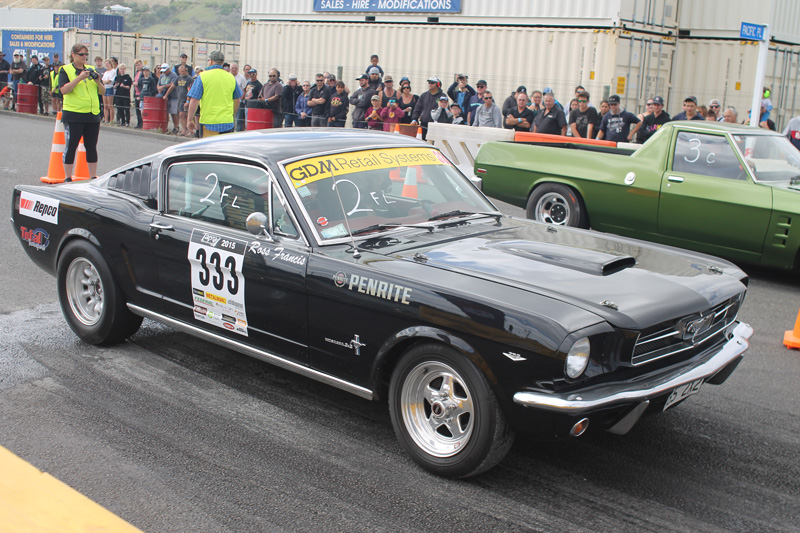 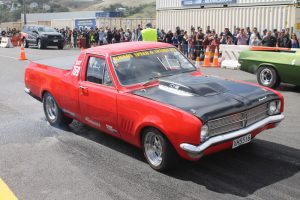 There was no post-anniversary lag for the Wanganui Road Rodders as the 31st edition of their annual Street Drags down Taupo Quay pulled in another good crowd of locals who saw the fastest times in two years being recorded on the sensors yesterday.

After Taupo Quay was resealed in 2015, it has taken a bit of time for the pavement to settle down and lessen the amount of wheel-spin, but several drivers were able to get their pass times back down to the low seven second mark.

Ross Whelan in his Ford Y was able to make a 6.93s pass on his last run of the day – the first driver to break into the sixes in two seasons.

The prestigious Ivan Jones Memorial Trophy was won by Tristan Teki for his 7.13s time in the 1966 Impala, on what would be a big afternoon for the Teki household.

In the push to get more women drivers involved in the sport, Teki’s wife Joanne spearheaded a six-strong division and was the fastest lady, as well as pulling down the third quickest time overall for the day at 7.3s – beating every club member except her husband.

Joanne had the last laugh by defeating Tristan in the Wife vs Husband race.

Craig Wilson, a vet
eran dragster going back to the Heads Rd days, was able to share the pink 1955 Chev with his wife Tash, who like Joanne Teki was making her debut.

“It’s going pretty good – she’s done an 8.5s so far, I’ve done a 7.9s,” Wilson said before the knockout section of the afternoon.

“We’re getting a little bit more grip [from road]. 400hp will go down this track ok, anything else is touch and go.

In total, there were 60 entries including five bikes and four competition cars – down from 70 in 2016 although this was due to 10 withdrawals because of the density of other drag events this month. 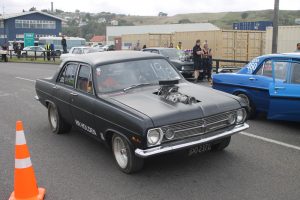 For example, Allan Smith ran the national championship event in Motueka on Saturday, then put himself on the Cook Strait ferry and drove back to Whanganui, arriving at 4.30am for a brief nap in his bus at the track, before unfortunately blowing his transmission on the first pass in the morning.

Auckland’s Chris Hornblow brought his 1956 Chev Gasser down and made a personal best 7.5s pass in the Group 1 division, coming second to Whelan.

Even with improved road conditions, drivers still had to treat the one-eighth mile with respect, as Brent Wittingham discovered as he took off in a warmup and fish-tailed slightly to just graze the barrier – one of a couple of barricade bonks during the day.

Organisers were also chasing a couple of glitches through their new computer seeding system, but despite the small delays they were still able to finish by 3.15pm.

“The track was getting better, as I said it would, with the sun.

“The seeding system will be better next year. But the drivers loved it, everyone got more laps in.”

Rivers’ son Adrian was able to take the family’s Blu’s Brothers dragster out for one demo lap for the fans, once the crew had worked through a fuel pump issue, and they delivered a 7.6s pass.

“[Happy] considering we can’t get it up to full [speed] and it’s just a demo. It’s loud and strong,” said Grant Rivers.

“We only just put this engine in yesterday. Getting it fixed up for the nationals.”

The Rivers clan will go to Masterton still holding a 40 point lead in their division, despite skipping Motueka to focus on the Street Drags.

The Rodders wanted to thank all their sponsors as the costs increase every year to put on this event, which is their sole fundraiser.