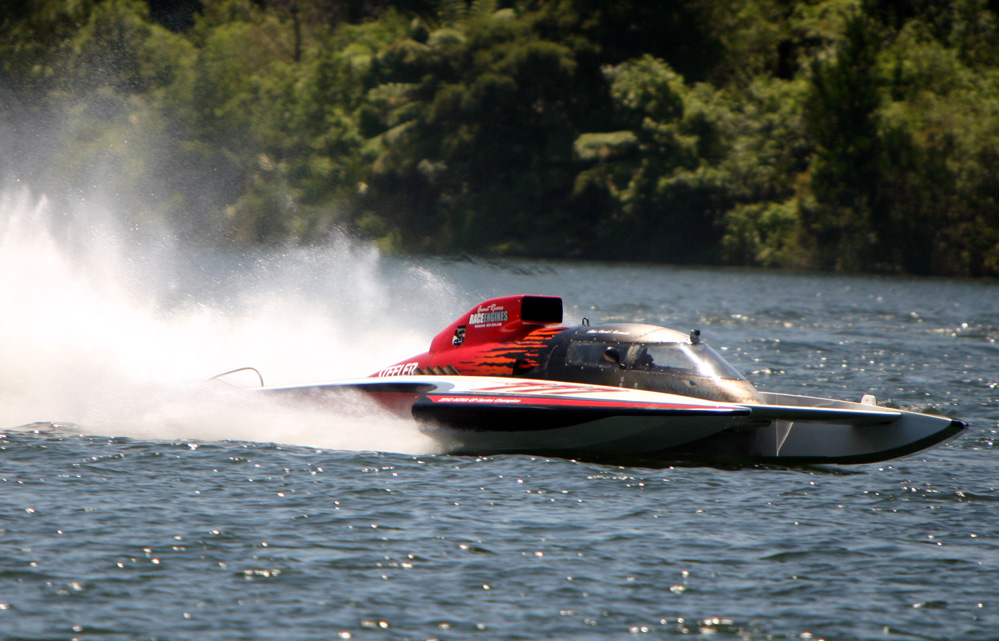 By: Iain Hyndman
Iain Hyndman is a reporter for the Wanganui Chronicle

Consistency proved a winning formula for David Alexander and his GP777 The Steeler team in the 2017/18 New Zealand hydroplane season.

The Waverley racer won the inaugural Hydro Thunder Series, reclaimed the Masport Cup from cousin Jack Lupton (Penrite Repco GP57), won the points round at the Lake Karapiro leg of the series and finished second in the King of the Nationals, the North Island Unlimited Unrestricted Championship and the New Zealand GP Series at Blue Lakes in Rotorua.

Each series leg had its own stand alone points championship, while Rotorua also hosted the King of the Nationals, the NZ GP Series and North Island Unlimited.

The new Hydro Thunder Series is won on points accumulated at two races at legs on Lake Taupo, Lake Karapiro and Blue Lakes, while the Masport Cup, the most coveted New Zealand trophy, is raced for as a one-off at a venue chosen by the holder.

“Consistency did it for us this season,” Alexander said.

“We finished every race and never got towed in from any of the 14 races we competed in and that’s unusual in this game. It’s a real credit to our crew. Grant Rivers (engine builder) and his team did an outstanding job.”

Alexander went into the Blue Lakes final round of the Hydro Thunder ahead on points, but was a tad nervous and in two minds whether to play it safe or power down and ensure a series win.

“I’d already sold my boat and was worried about breaking it. I started the King of the Nationals with Scott Coker (Fair Warning GP10) on one side of me and Jack on the other. Jack and I ended up having a real tussle until he got the better of me for the win, but I was a worried man trying to take care of my boat.

“It was an exciting race and Jack only got passed my on the final lap. Scott ended up winning the North Island Unlimited and the National GP with me second in both,” Alexander said.

While he has sold his boat, Alexander plans to stay in the game and will be racing a new craft next season.

Meanwhile, Jack, bother Ken and father Warwick Lupton are off to race in Canada in the HRL (Hydroplane Racing League) Series at Valleyfield, 45 minutes drive from Montreal in May.

“We have been lucky to have secure a boat to race over there,” Jack Lupton said.

“It’s a smaller Grand Prix boat (GP48 Zéro Gravity ) built by Canadian Bert Henderson who built mine. I will be taking over all my hardware to install into it and Grant Rivers has built a new engine and will build another when we get over there. We also have a new motor already in Canada, so we should be very competitive with those running in a Bert Henderson hull.”

Lupton, who also won the Australasian AE Baker Trophy this year, will do the majority of the driving in the seven meeting series.

“Ken may do some driving, but is expecting a new baby in July, so will miss some meetings. We race at Valleyfield which is a river course and quite narrow. The HRL Series is like the Daytona of motorsport, it’s where hydroplane racing was born and if you win that you’ve won the lot,” Lupton said.

“Dad (Warwick) has arranged it all and will manage the entire trip – he’s the boss.”

The HRL Series runs from May through to August.