Only the 3rd run for the Dragster this Season with a new Motor Combination the desire to set everything slowly meant we had yet to make a full power pass in the Car. The first pass a three quarter run by grant show a lot of promise. Ardians turn behind the wheel was very late in the day the track running will behind time. a tyre pressure adjustment in the rear caused a big tyre shake which popped one of the chutes ending that run early. we going up for our third round when they called time on the days action.

Day two and it was nearly lunch time before we even had our Qualifying run, Grant was at the wheel and a very impressive run of 6.4 @ 205mph will under the BB Record that we were chasing . all we had to do was back it up with another run.. run 4 was first round of elimination and as top quailifyers we had a single pass run. Adrian was behind the wheel but the car wasnt starting a loose fuel line was found and tightened but all the start attempts played havoc with the fuel pump, the car was very lazy off the line. With big questions over the fuel pump and no spare we called it a day. 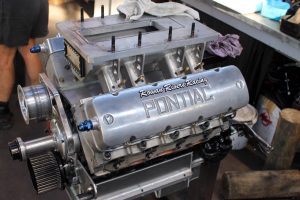 The Engine is currently being stripped down and then will be be rebuilt all ready for the New Season. The rest of the car will be completely stripped down checked over and rebuilt during the off season